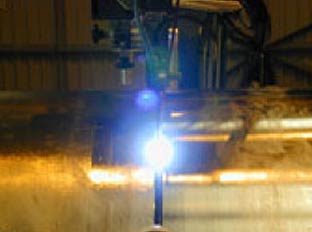 We use various joining methods in manufacturing components and larger entities. Joining techniques are used for the manufacture of HIP components, for example, when the preforms are welded together to form the finished product.

They can also be used for joining HIP components with cast or machined parts, and the joining of various metals.

Improved corrosion tolerance and fatigue resistance characteristics can be achieved with NG TIG welding, which is also very economical. It allows for a small number of welding runs and a low overall temperature input as well as produces a good residual stress profile in the HAZ. 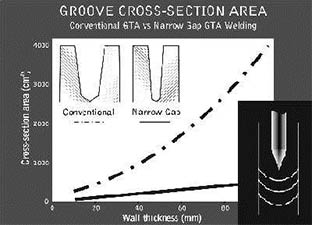 The specially designed narrow welding head accommodates the use of a four-cornered weld groove. The cross-section image given here illustrates the narrow welding groove compared to a traditional weld. The narrow groove can be used with a wall thickness of 10 mm and upwards.

Benefits of decreasing the number of welds:

Achieving these benefits requires the following: 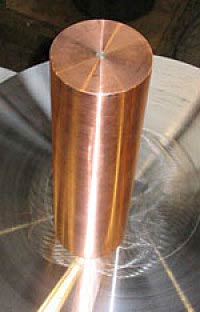 HIP diffusion bonding is a joining method for the solid phase which can be used to join many metals and ceramic materials together to manufacture small and large components.

In its simplest form, diffusion bonding means keeping pre-machined parts loaded and usually in a protective atmosphere or in an elevated temperature in a vacuum.

The forces used for diffusion bonding are usually below the load values that would cause macro deformations in the components. The process uses temperatures between 0.5–0.8 x Tm (where Tm = material melting point at K).

The holding period in the temperature in question may vary between 1–60 minutes depending on the materials joined, the required joint characteristics and other parameters. Even though most of the joints are produced in a vacuum or an inert gas atmosphere, some joints may be produced in a normal atmosphere.

After this, the bond develops using diffusion-controlled mechanisms, such as grain boundary diffusion and power-law creep.

Diffusion joints are very flexible but strong, and can therefore withstand extreme temperatures. The bonds are fully reliable even when the materials that are being joined have mismatched thermal expansion coefficients. Diffusion bonding is therefore particularly suitable for applications threatened by thermal shock at high service temperatures.

In HIP, much higher pressures may be utilised (100–200 MPa) and therefore surface finishes are not so critical, and finishes of 0.8µm RA and greater can be used. A further advantage of this process is that the use of uniform gas pressurisation allows complex geometries to be bonded, unlike the generally simple butt or lap joints possible with uniaxial pressurisation.